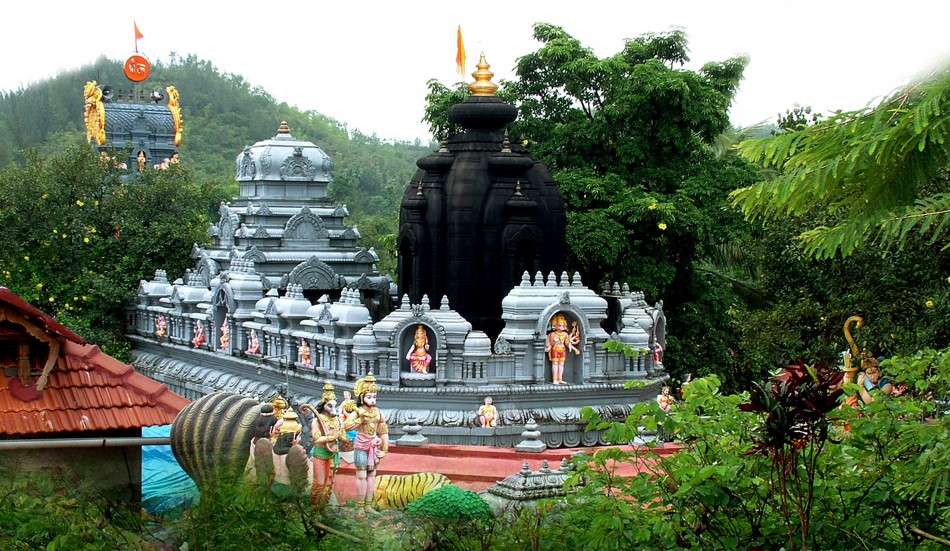 In Bantwal Taluk, Karopady Village, at the foot of Kalenjimale, the Om Shri Viranjaneya Swami Kshetra, as an embodiment of asceticism, was established on 15-2-1989 by the revered Shri Narayana Swami, which later became Shree Gurudevadatta Samsthanam; the revered became Shri Gurudevananda Swamiji. Three decades ago, Odiyooru was merely a waste land. But Odiyooru Shree Gurudevadatta Samsthanam, founded by His Holiness Shree Gurudevananda Swamiji, has transformed the land into a multifaceted center in a short period of time. Being called as the Ganagapura of south, it has become an abode of communal harmony.

Today, it has not just remained as Shree Dattanjaneya Temple but has become a cultural center, an abode of knowledge, a platform to campaign the principles of the guru, a sanctuary for forsaken people, a shelter to arts, culture, literature and music, a shrine nourishing the pride for Tulu Language.

In Shree Samsthanam, a specially built black stone garbhagudi tower is 35 feet tall. This spectacular tower has been raised from the uniquely-designed lotus pedestal.

In Karaikudi of Tamilnadu, many sculpture experts executed stone carving, and in Shree Samsthanam, for 48 days, many sculptors with their unmatched skills completed this garbhagudi. It is in Vesara Sculpture style, one of the Hoysala’s architectural styles.

The famous sculptor Dakshinamoorthy had handled this project. Previously, he had worked on the construction of the spiral tower and the salutation hall in Shree Samsthanam. He has also gifted 5 feet 4 inch tall idol of Shri Anjaneya, made of black stone to the Shree Samsthanam. The idol was installed on the same day (21-2-2001) when the 1 foot 1 inch tall crystalline idol of Shri Dattatreya was installed in the new garbhagudi. The installation rituals were carried out according to Vedic tradition. 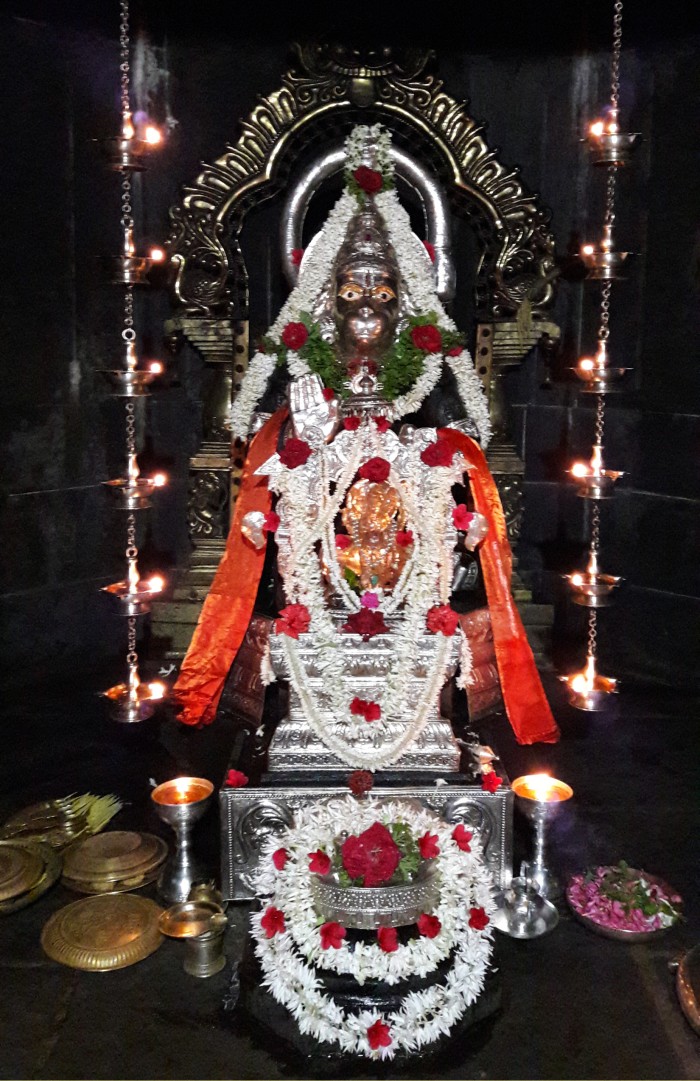 The dearest son of the great sage Atri and his pious wife Anusuya Devi is Shri Dattatreya Prabhu. Since Gurudev Dattatreya is the creator, preserver and destroyer, he is the earthly form of trinity. Like Lord Brahma, Gurudev creates goodwill, good thoughts and righteousness in his devotees. Like Lord Vishnu, he preserves joy, liturgy and self-contemplation. And finally, like Lord Shiva, he destroys lust, anger and other grave sins. Thus, Shri Gurudeva Datta along with Shri Anjaneya Swami and Shri Vajramatha Devi are the main deities.

In Shree Samsthanam, Shri Balamuri Ganapati is worshipped as the obstacle-destroyer. His brother, Shri Subrahmanya Swami is one among the family deities. Shri Maha Vajramatha accepts the devotees’ services along with Shri Badhrakali Dakshinamurthy, and Moolarama family deities.

There are three types of trees namely; Gooseberry (Nelly), Cluster Fig (Atti), and Coral Jasmine (Parijatha), outside of the Salutation Hall of Shree Samsthanam. These trees have extreme medicinal qualities and have importance for existing in the presence of Shree Dattanjaneya. During the Swarna Prashna, it is revealed that these trees had come in touch with Sanjivini Herbs from Chandra Drona Mountain. 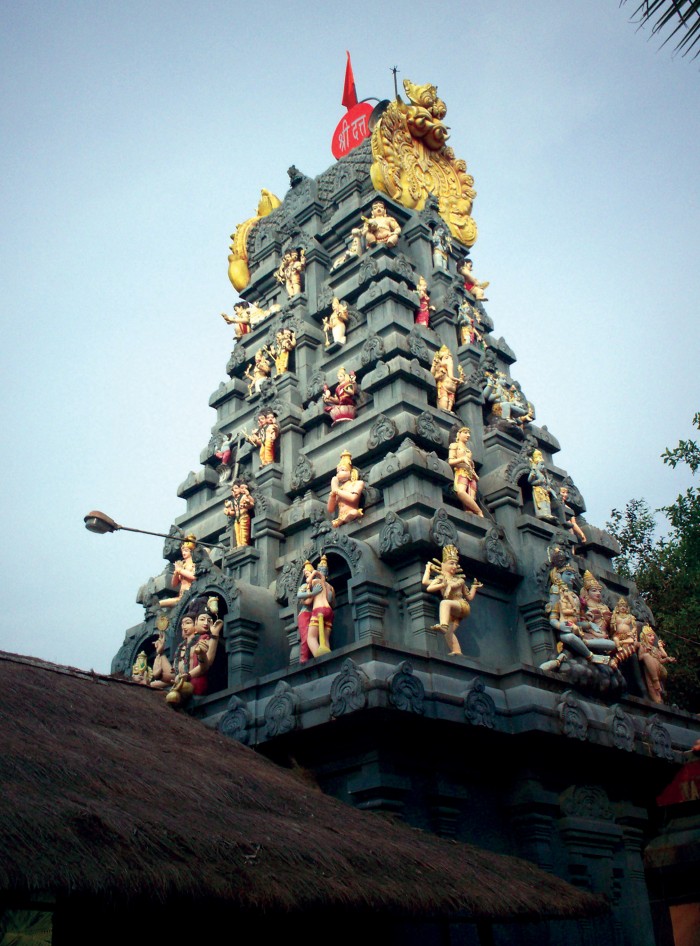 A 40-feet tall, grand, and artistic tower known as Rajagopura welcomes us, as we enter Shree Samsthanam. Wide and the puranic historical paintings captivate our minds. In the east side, we can see the adventures of Shri Hanumanji in the form of dazzling paintings. In the south side, the adventurous tales of Lord Shiva are depicted in pictorial series. In the west side, the artworks exhibiting the glory of Shri Guru Dattatreya mesmerize us. In the north side, the idol of Shrimannarayana is the proof to the majestic beauty of art. As the Holy Seer’s opinion, 64 sculptures represent 64 arts.

In addition to those, there are relief sculptures that depict various puranic tales. The vibrant color paintings recreate the puranic world in front of our very eyes.

Yajna Mantapa (Teertha Mantapa) has been built with smooth granite stone in front of the garbhagudi. The fine artistic works done will dazzle you. When you enter the Yajna Mantapa, you will see enticing exclusive wooden carvings on the doors. All are materialized under the direction of the Holy Seer. 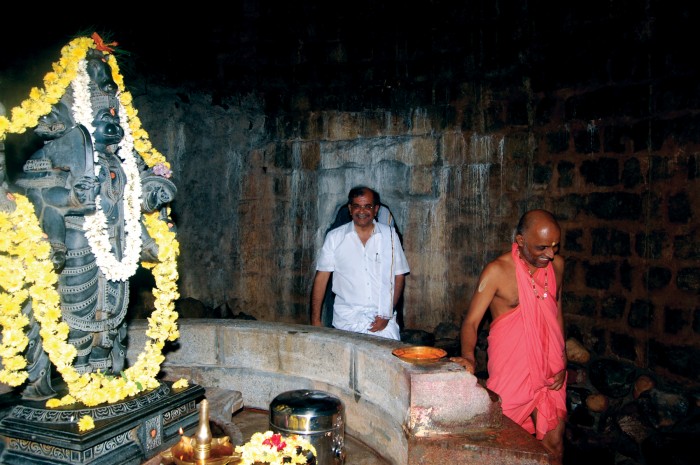 Another huge attraction that Shree Samsthanam has is the artificially made Nityananda Cave. This cave was inaugurated by the then sage Shri Vidyabhushana Teertha Swamiji in the holy presence of Muni Samartha Shri Shri Vivekananda Muni.

Inside this cave, many serene spots are built in order to comfort the ascetics so they can do meditation, penance, excogitation in retreat. Ample natural light and free air flow are the highlights of this cave. One can meditate or penance without an obstacle. One can hear the sound ‘Om’ emanating from the floor of the cave when he / she put ears to the floor. One will not feel hot or cold inside this cave.

In January 28, 2007, the statues of Shri Panchamukhi Anjaneya Swami, Shri Maha Ganapati, and Shri Vajramatha were installed inside this cave. The cave house was inaugurated by the Holy Seer of Shri Subrahmanya Mata, Shri Vidyaprasanna Shripada.

In one branch of the cave, there is a small fall. In south-east side, there is the beautiful ‘Hanuma Gange’, in south-west side, ‘Gupta Gange’, in north-east side a well of holy water exists by the foresight of the Holy Seer. This cave’s construction work has been carried out in three branches up to the roots of the atti tree in the premises of the Yajna Mantapa. Several meditation spots, about 4 feet high and 21/2 feet wide, are built in the tunnel so many people can meditate, study, and recite at a time. However, public has to get permission before entering the cave. This cave is one of the examples, how a worshipping place like Shree Samsthanam is being transformed into a tourist spot. 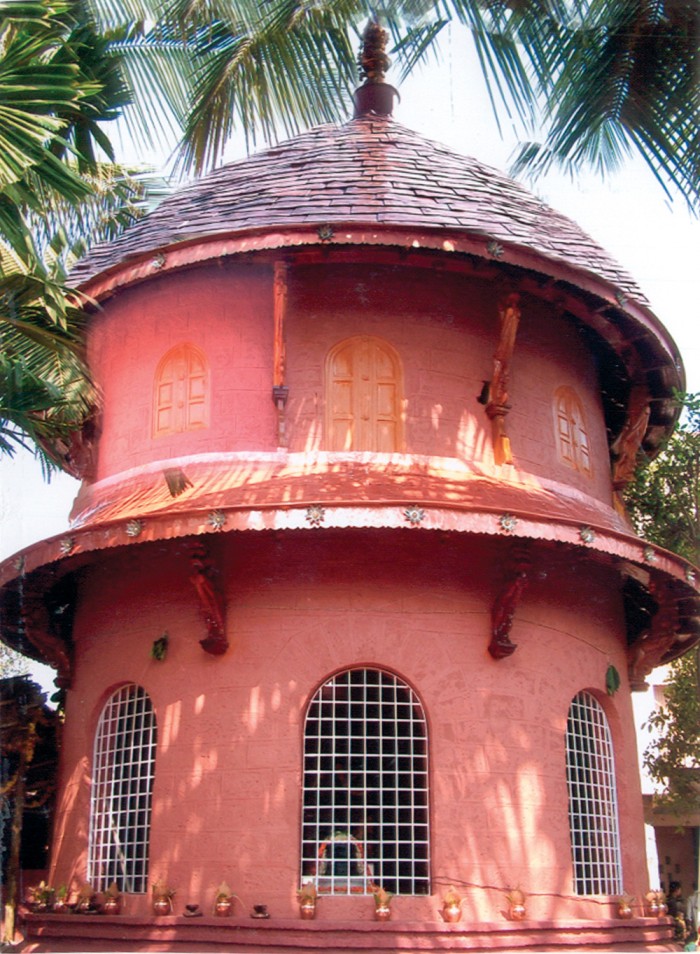 A two-storey, circular, beautiful Shree Gurudevadatta Peeta has been built in Shree Samsthanam. A statue of naga has been installed nearby Shree Gurudevadatta Peeta. Inside the Peeta, the Holy Seer meets the devotees on Thursday, Saturday and Sunday. The devotees consult him with their problems in life, and he provides relief to them. The Shree Samsthanam offers various types of seva for the deity as well as rituals to remove obstacles or sins such as Ashlesha Bali, penance rituals related to Nagadosha, skin related issues, and in having child etc.

In the view of the Holy Seer, sages and society are two sides of the same coin. He gives prominence to social responsibility and says, “Along with edification, the protection of entire society’s welfare also should be a sage’s work. If so, such nation never ever crumbles down due to the collapse of cultural dynamism. The education should be given from the guru peeta in order to enable the people to choose the way of life which allows one to live as well as letting others to live.”

In our society, a guru peeta is looked upon with utmost reverence. Shri Gurudevadatta Peeta has been providing proper guidance to its disciples in order to awaken the righteousness in them. A guru peeta and disciples’ community are complimentary to each other. The closer the relationship between each other the easier the dream of a healthy society can be materialized.