In an auspicious program undertaken by the Bunts Bahrain Association Executive Committee and its members, His Holiness Shri Shri Gurudevananda Swamiji of Odiyoor was invited to Bahrain to deliver a moral discourse for the benefit of general members, their families and well-wishers at the Isa Bin Salman Cultural Hall of the Alumni Club in Adliya on the evening of Friday the 26th November, 2010.

The program took-off at 6.00 p.m. with a devotional song by Mr. Ravindra Prabhu. Swamiji was welcomed to the Hall with the accompaniment of the traditional Poorna Kumba welcome, complete with the beating of drums, dancing and ‘kalasa’. Mr. Doomanna Rai welcomed the Swamiji, all the devotees and guests who had assembled in the Hall with much eagerness. A prayer song by Ravindra Prabhu and an Invocation Dance under the direction of Ms. Nayana Rai and choreographed by Ms. Aasthika Shetty gave the right prayerful and divine touch to begin the program. Mr. Amarnath Rai, President of Bunts Bahrain along with the other Executive Committee members escorted the Swamiji onto the stage and to his specially erected podium seat.

The President of Bunts Bahrain then addressed the gathering welcoming the Swamiji on his maiden visit to Bahrain and thanking him for accepting the invitation. It was the turn of Mr. Sunil Shetty to read to the audience the Swamiji’s profile in introduction. The Swamiji was felicitated with a memento in appreciation of his visit to Bahrain and on being with the community.

The Swamiji then delivered the “Pravachana” for nearly 30 minutes, a moral discourse enchanting the entire audience with choice messages as he gave typical examples in daily life on spirituality, love, service and generosity. Science he said, may give us proof for every single thing but it is our exemplary experience in life and benevolence as role model human beings that will leave behind an indelible mark of existence. The audience responded with peals of laughter at intervals as he laced his talk giving humorous examples and acknowledged his appreciation with rich applause. “Richness without generosity is like a tree without shade”, said the Swamiji resolutely.

He expressed delight in the warm welcome given to him by the community and was impressed by the various activities undertaken by the dedicated members praising the efforts made by all and encouraged all to continue with the good work. The Swamiji immensely thanked the Bunts Bahrain Association for their benevolent gestures and works. He concluded by thanking the Bunts Bahrain organizers for inviting him over to Bahrain and concluded by imparting divine blessings to all and wishing all the programs of the Association every success.

The program was capably compered by the Master of Ceremonies, Mr. Sudhir Shetty, in his inimitable style.

All the devotees and well-wishers were given the opportunity to meet the Swamiji with reverence on stage and take his blessings as he personally distributed the “Prasadam” to each one of them. 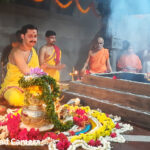 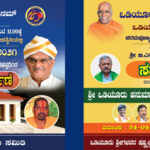